Everything I needed to understand what was going on with "Spring4Shell" - translated source materials, exploit, links to demo apps, and more.

These are all my notes from the confirmed! 0day dropped on 2022-03-29. This vulnerability is commonly referred to as "Spring4Shell" in the InfoSec community - an unfortunate name that calls back to the log4shell cataclysm, when (so far), impact of that magnitude has not been demonstrated. I hope this repository helps you assess the situation holistically, learn about the vulnerability, and drive risk down in your organization if risk is present. :)

Please note that this is a different issue than CVE-2022-22963! Major cybersecurity news outlets, including ThreatPost, have gotten this fact wrong - and this is compounding confusion across other outlets and making triage much more difficult. See the Misconceptions section for more details! The actual CVE for this issue has been released 2022-03-31 and is CVE-2022-22965.

On March 29th, A GitHub user (p1n93r) claimed that by sending crafted requests to JDK9+ SpringBeans-using applications, under certain circumstances, that they can remotely:

Shortly after, p1n93r's GitHub and Twitter disappeared, leading to much speculation. After an uncertain period of independent research, on March 30th reputable entities (ex. Praetorian, endividuals such as @testanull, etc.) began publicly confirming that that they have replicated the issue, and shortly after, demo applications (see "DIY" section) were released so others could learn about this vulnerability.

Thankfully, Spring team did take this seriously, and a patch was released on 2022-03-31 - please see "Mitigation!." This vulnerability has also been upgraded from High to Critical severity.

I translated and annotated p1n93r's original Vulnerability Analysis PDF (original here) from Mandarin to English, including the author's screenshots, in ANALYSIS_EN.md. This was machine-translated, but the accuracy and clarity has been improved by @yuesong via PR - thank you, Yuesong!

The exploit itself is available at exploit.py, and has been formatted using Black for slightly improved clarity.

Looking for the original copy of this documentation? Use vx-underground's archive here: https://share.vx-underground.org/SpringCore0day.7z

Want a technical breakdown of the exploit that is way less messy than the author's original documents? I recommend diving deeper with LunaSec's exploit scenario which is comprehensive and comprehensible.

A few sample applications have been made so you can validate the PoC works, as well as learn more about what cases are exploitable. Tthe simplest example of this I can find is courtesy of @freeqaz of LunaSec, who developed lunasec-io/spring-rce-vulnerable-app as a companion to their fantastic in-depth article about this vulnerability (linked in the "Further Reading" section).

Additional demonstration apps are available with slightly different conditions where this vulnerability would be exploitable, such as reznok/Spring4Shell-POC (neatly Dockerized and very clean!) retrospected/spring-rce-poc (uses a WAR file, which is closer to the original demo, but may be slightly less approachable) for those interested in tinkering!

All this smells of "How can I make an app that's exploitable" vs. "How can I exploit this thing that exists?"

Also, the Spring documentation is clear about security implications of YOLO usage of DataBinder. So add ignoring security guidance to the list above, and, well, I'm suspicious.

It was later discovered that there are cases in the wild where this vulnerability is working, most notably in the "Handling Form Submission" tutorial from Spring, as discovered by @th3_protoCOL. However, thus far nobody's found evidence that this is widespread.

In my opinion, any news article going out of its way to say "could this be the next log4shell?!?" is willfully overblowing this - this is a severe vulnerability, sure, but it only impacts nondefault usage of SpringCore with no proven widespread viability. It's categorically not log4shell-like.

While this currently does not seem like it's going to be a cataclysmic event, given this is a Critical RCE and being actively targeted by attackers (refer Bad Packets and GreyNoise), it is at least worth the research to figure out how much risk exposure your organization could have.

The simplest/most straightforward test I've seen for establishing whether or not a service you administrate is vulnerable was published by Randori Security's Attack Team:

The following non-malicious request can be used to test susceptibility to the SpringCore 0day RCE. An HTTP 400 return code indicates vulnerability.

It's not clear if this is 100% comprehensive, but it should be a very good starting place for anyone that needs to automate or mass-scan endpoints!

Spring has released a CVE and patches for this issue, alongside full details on this blog post. It is strongly recommended to upgrade to Spring Framework versions 5.3.18 or 5.2.20, which are now available. Additional details about upgrading are available in the blog post above, including information on upgrading with Maven or Gradle.

Additionally, Spring Boot 2.5.15 is now available which includes the patch for CVE-2022-22965, per this additional blog post from Spring.

Once you patch, you are no longer vulnerable to CVE-2022-22965. However, if you know your application is/was vulnerable, you should look for signs of malicious abuse or initial access, such as webshells which were dropped by attackers (such as Initial Access Brokers) to come back to later. As of 2022-03-31, mass scanning for this vulnerability is reported underway by Bad Packets and GreyNoise.

The original PoC's README linked to an alleged security patch in Spring production here, however this was met with a rebuttal from the maintainer (see below), and many confirmations that the vulnerability is still working in up-to-date versions of Spring on 2022-03-30. This patch appeared unrelated, and was probnably flagged by the original author due to a misunderstanding.

... The purpose of this commit is to inform anyone who had previously been using SerializationUtils#deserialize that it is dangerous to deserialize objects from untrusted sources.

The core Spring Framework does not use SerializationUtils to deserialize objects from untrusted sources.

If you believe you have discovered a security issue, please report it responsibly with the dedicated page: https://spring.io/security-policy

And please refrain from posting any additional comments to this commit.

Now several days later, Spring confirmed that a patch had to be written to resolve this exploit. The precise fix appears to be this commit which limits what can be bound to CachedIntrospectionResults.

These sources, in my opinion, Get It Right (and go into more detail!):

A big thank you to folks who contributed to this living document!

The Devils Eye is an OSINT tool that searches the Darkweb for onion links and descriptions that match with the users query without requiring the use for Tor.

The Devil's Eye searches the darkweb for information relating to the user's query and returns the results including .onion links and their description

Automatically fetch, measure, and merge subscription links on the network, use Github Action

Phoenix Framework is an environment for writing, testing and using exploit code. 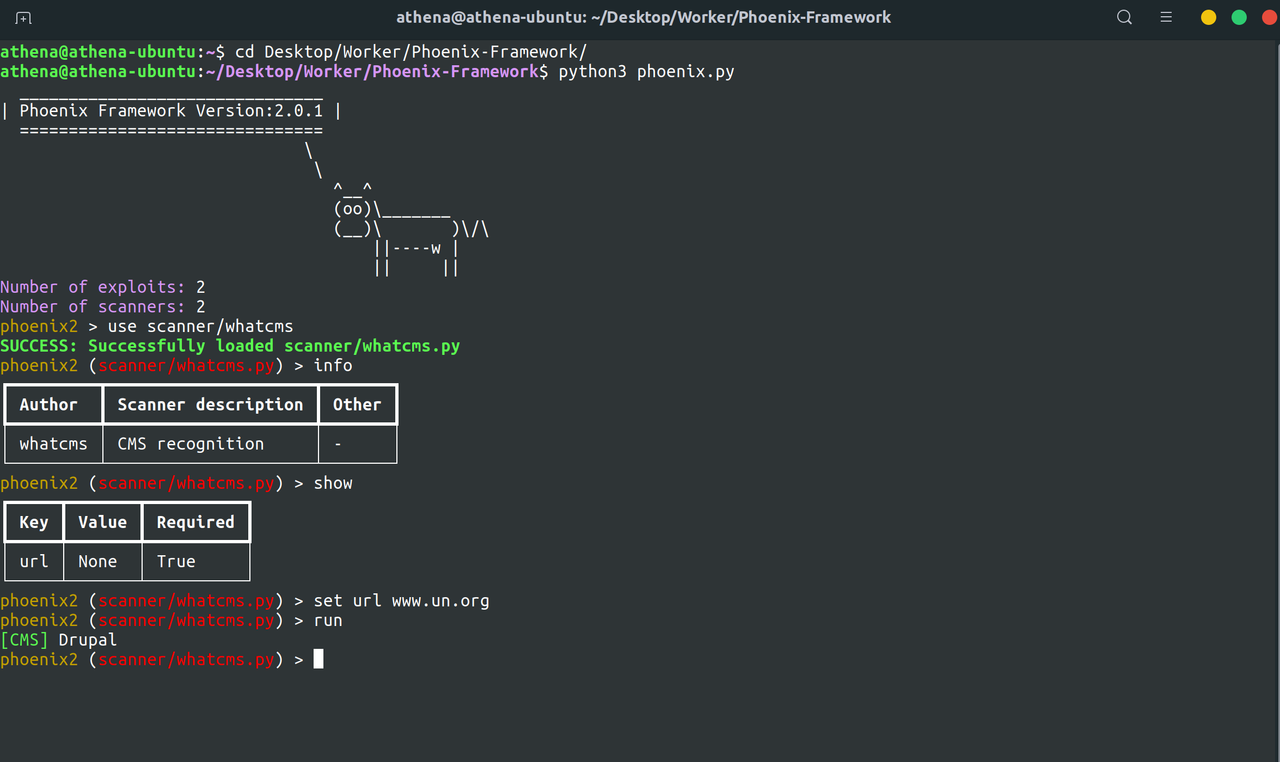 adb - A tool that allows you to search for vulnerable android devices across the world and exploit them.

adb - An exploitation tool for android devices. A tool that allows you to search for vulnerable android devices across the world and exploit them. Fea Phoenix Framework is an environment for writing, testing and using exploit code.

This is a repository filled with scripts that were made with Python, and designed to exploit computer systems.

PYTHON-EXPLOITATION This is a repository filled with scripts that were made with Python, and designed to exploit computer systems. Networking tcp_clin

Spring Core RCE - CVE-2022-22965 After Spring Cloud, on March 29, another heavyweight vulnerability of Spring broke out on the Internet: Spring Core R

Log4Shell RCE Exploit fully independent exploit does not require any 3rd party binaries. The exploit spraying the payload to all possible logged HTTP

tinyman_exploit_finder There was a big tinyman exploit. You can read about it he

Discord-email-spammer-exploit was made by Love ❌ code ✅ ?? ・Description First it

Chrome Post-Exploitation is a client-server Chrome exploit to remotely allow an attacker access to Chrome passwords, downloads, history, and more. 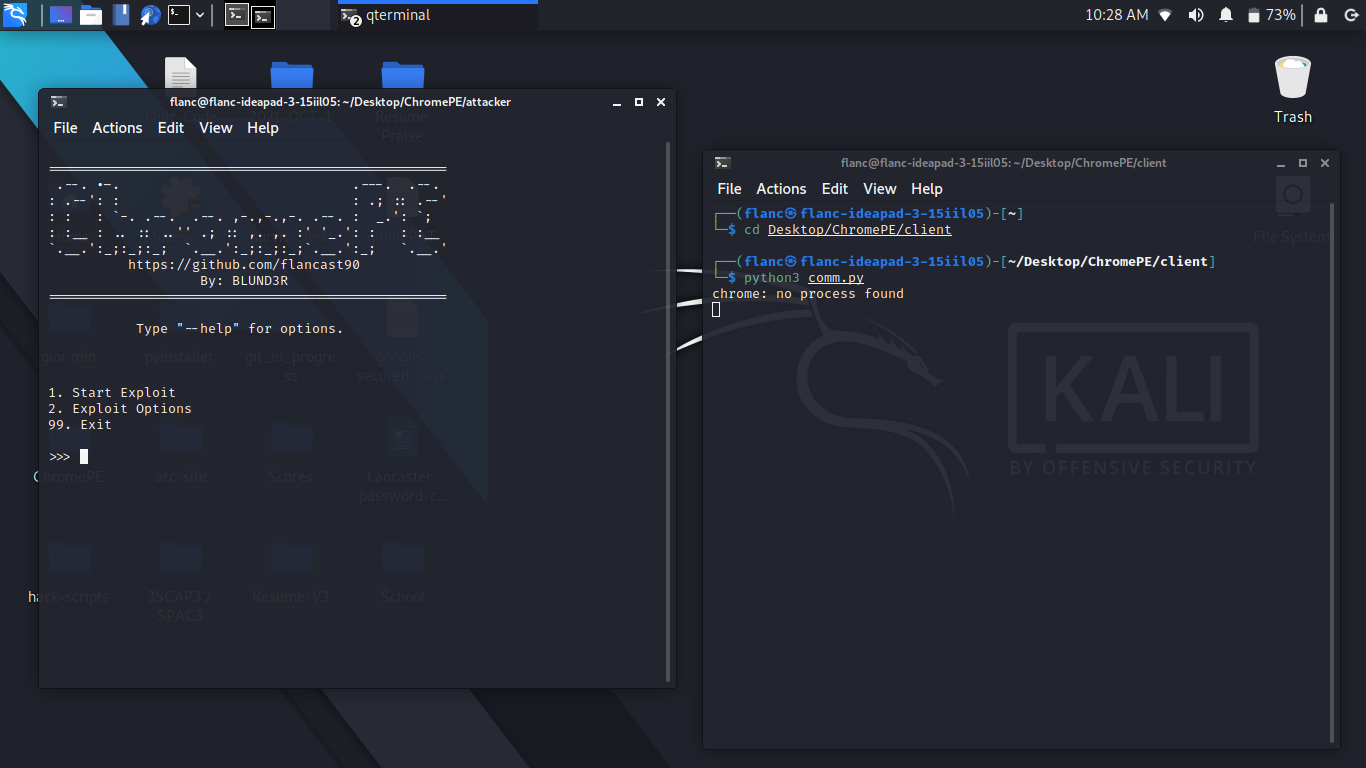